The Brains Behind It: New knowledge about the brain and learning 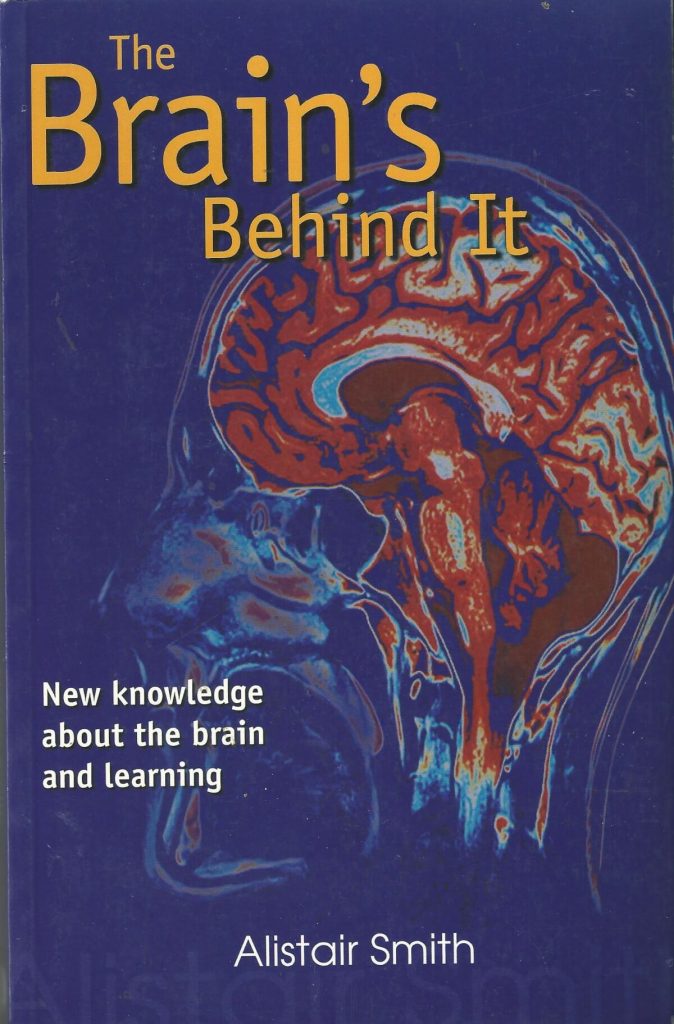 In 2003 I wrote a book which attempted to address some of the common misconceptions about the brain and learning. It was, and is, the book of which I’m most proud. It took a long time to research and write. In some ways it was ahead of its time and it has value today 13 years later. Here are the 16 fallacies which I wrote about in the first Chapter

Fallacy one: you only use 10 per cent or less of your brain

A UK book for teachers published in 1999 states, ‘we use around 2 per cent of our brainpower – this means we waste 98 per cent’. For years, the 10 per cent myth has circulated in the world of self-help psychology. It is a beguiling thought that if there is so much spare capacity, what if we could exploit only 1 per cent or 2 per cent more of it? The truth is that functions such as movement, perception, memory, language and attention are all handled by different areas of the brain. These areas are widely distributed. If you were to lose 98 per cent of your brain, how well would you perform? If 98 per cent is held in reserve, what is it held in reserve for? Should there not be better recovery after trauma? There is no area of the brain that can be damaged without some loss or impairment, however temporary, of function. The brain is highly integrated. For example, imaging studies of sleep show activity in all areas. The problem arose when the self-improvement industry misinterpreted early researchers who said they only knew at most 10 per cent of how the brain functions.

Fallacy two: you have three brains in one

Pick a number! This refers to Dr Paul MacLean’s triune brain theory. The theory that our brain comprises a primitive or reptilian centre, an emotional and attention centre and a higher order thinking centre was first discussed in the 1940s and, nowadays, modern researchers would not know anything about it. It has endured because it has a powerful, easily understood metaphorical value and it aligns with Maslow’s hierarchy of needs theory. Educators can see the sense in it straight away. The three brains in one theory is not wrong, it is out of date. Science has left it behind

This assumes that you take everything in and it is stored somewhere. You have infinite capacity and you can draw on that capacity sometime in the future. It is true that your brain probably looks and feels like a sponge, but it never acts like one. Amongst neuroscientists there is a concept known as neural pruning. As you grow you reorganise your brain to cope with the demands you place on it. Millions of neural connections that are not put to use get pruned away. If you were to attend to every bit of data that hits your senses, you would not be able to cope with life. To have all your life’s accumulated data available is a dysfunction. Selection is part of what the brain does to keep you healthy. Sponges do not select.

Partly true! However, it depends on the nature and the duration of the stress, the individual concerned and what is being learned. Short-term, moderate stress is good for learning. Different individuals adapt to anxiety in very different ways. Some ‘learning’ in stress is so ‘successful’ that it is impossible to shift thereafter. Post Traumatic Stress Disorder is an example of this. The old thinking used to be that in stress ‘downshifting’ occurred and higher order thinking was then impossible. Different and more sophisticated models now prevail.

Fallacy five: use it or lose it

True – but needs clarification. Active engagement in a task reorganises the brain whereas passive stimulation does not to anything like the same degree. Learning can and does occur out of conscious awareness but it is not as enduring as that which occurs through active engagement. A further improvement on our understanding of the ‘use it or lose it’ idea is that the brain is programmed to be experience dependent and experience expectant. In other words, at some stages in our development, some types of experience are more important than others. An adult learning a new language uses different brain structures than a child. The former is dependent and the latter expectant.

Fallacy six: your left brain is logical and your right is creative

A seductive idea that has slipped firmly into popular culture. There is no gene, no synaptic connection, no chemical, no area or region, no hemisphere in the human brain, that is exclusively responsible for any specific behaviour. Different neural networks within the brain collude with different chemicals to produce responses. Damage the networks or alter the chemicals and you change the responses. Localised damage to one site on either side of the brain can result in loss of function, permanently or temporarily. This does not mean that that site alone was responsible for the function.

Fallacy seven: you have an emotional brain

There is a view that we have four basic emotions. They are anger, sadness, fear, joy. Other emotions are formed from a mix of these. Scientists believe it improbable that one brain structure could run competing emotions. Just as separate but interconnected structures contribute to everyday functions, so it is now thought that different but connected structures contribute to the subtleties of emotional response. Many neuroscientists are sceptical about claims for what is termed ‘emotional intelligence’ and its links with brain structures.

Fallacy eight: there is a special needs brain

There is not a Muslim brain, a white brain, an Inuit brain, a Chelsea Football Club supporter’s brain, a shopkeeper’s brain or a special needs brain. An individual, particularly a child, should not be labelled by any category of function or dysfunction. It is a wonderful spin-off from brain research that we now know a lot more about very specific cases of dysfunction from which we can begin to generalise. The work at Oxford University on dyslexia and at University College London on autism are good examples. This can help teaching, but it remains a terrifying thought that we should begin to teach a brain rather the child who owns it.

No he does not! The Mozart effect is a classic case of the media’s love of a sexy story and the promise of instant reward meeting with one research project – which had a limited cohort and a very tightly defined task – and prematurely articulating. Not once, but again and again worldwide. Hidden deep behind this there is genuine, quality research. What is of equal interest is how quickly the research can be selected, distorted, and re-packaged when there is sufficient public demand. Playing your slumbering infant Mozart piano sonatas is unlikely to do much more than disturb his, and later your, sleep.

Fallacy ten: enriched learning environments give your child a better start in life

There is no substantial scientific evidence in support of this. The evidence from laboratory research on rats proves that the absence of a normal environment inhibits learning. It does not prove that extra stimulation enhances brain growth, learning and intelligence. Cancel your subscription to Infant Genius Monthly, throw away your flash cards and play together the three of you: the baby, you and the cardboard box.

Fallacy eleven: children can only concentrate for two minutes more than their chronological age

A maxim that has become accepted as a truth. There is no science behind this. If there were, it would not make such an easy generalisation. Buy your ‘hyperactive’ teenager a Playstation 2 and put it to the test. Human attention varies in its nature. Concentration times are dependent on the individual, the task and the context, not on chronological age.

Fallacy twelve: the brain cells you get at birth are those you have for life

No longer held to be true. Stem cell research and research into neuroplasticity in adults suggest that we can and do grow new brain cells in certain areas of the brain. The hippocampus, an area associated with learning and memory, is one such area.

Fallacy thirteen: there are critical periods within which specific developments must occur

This was long held to be true, but has recently been questioned. The correct terminology is now sensitive periods. It is believed that rather than stop abruptly, developmental periods fade away.

Educators often hear the lament, ‘he gets it from his father’. This is usually an apology for a perceived problem or lack of ability. What the boy sees his father do, how the father talks to and around him, and how the father relates to life’s challenges contributes as much to the boy’s subsequent behaviour and abilities as his genetic legacy. Genes instruct and guide the body as it develops. Environment, acts with genetic inheritance to create a unique brain. Identical twins with the same genes do not have identical brains. The brain alters with use. Adult neuroplasticity is real and remains so right into old age.

Fallacy fifteen: your memory is perfect

To quote from a popular text ‘there is now increasing evidence that our memories may not only be far better than we ever thought but may in fact be perfect’. Sadly, this is wholly untrue. If you had a perfect memory, your life would be hell. Memory is less about recall than it is about reconstitution. Memories do not reside hidden away in specific sites within the brain. Memory relies on a coming together of a number of variables. Change any of those variables and you change the memory. Memory is by its very nature imperfect! False memory syndrome is real.

Fallacy sixteen: male and female brains are so different we ought to teach boys and girls in different ways

Justification for teaching boys and girls in different ways does not come from brain research. Men and women are different, behave differently and have some difference in the organisation and structure of their brains. This does not provide a good rationale for education policy. The differences between male and female brains that are reported by many popular texts are exaggerated.

Send me a message

For more of my work on high performance go to ThreeWhats.com.

Top
We use cookies on our website to give you the most relevant experience by remembering your preferences and repeat visits. By clicking “Accept”, you consent to the use of ALL the cookies.
Cookie settingsACCEPT
Manage consent

This website uses cookies to improve your experience while you navigate through the website. Out of these, the cookies that are categorized as necessary are stored on your browser as they are essential for the working of basic functionalities of the website. We also use third-party cookies that help us analyze and understand how you use this website. These cookies will be stored in your browser only with your consent. You also have the option to opt-out of these cookies. But opting out of some of these cookies may affect your browsing experience.
Necessary Always Enabled
Necessary cookies are absolutely essential for the website to function properly. These cookies ensure basic functionalities and security features of the website, anonymously.
Functional
Functional cookies help to perform certain functionalities like sharing the content of the website on social media platforms, collect feedbacks, and other third-party features.
Performance
Performance cookies are used to understand and analyze the key performance indexes of the website which helps in delivering a better user experience for the visitors.
Analytics
Analytical cookies are used to understand how visitors interact with the website. These cookies help provide information on metrics the number of visitors, bounce rate, traffic source, etc.
Advertisement
Advertisement cookies are used to provide visitors with relevant ads and marketing campaigns. These cookies track visitors across websites and collect information to provide customized ads.
Others
Other uncategorized cookies are those that are being analyzed and have not been classified into a category as yet.
SAVE & ACCEPT